I'm feeling a bit conflicted. How am I supposed to look like a music critic if I get all these FUCKING AWESOME BANDS?!!!
And that's exactly what I was thinking when I heard today's band. 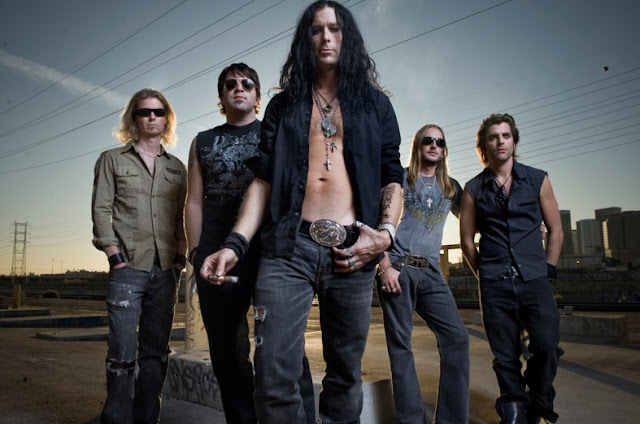 This is probably the first band review where I actually have a band with a verified Twitter account and is signed to a label. I have no idea how they managed to go under my music hunting radar all this time but I'm so freakin glad I got the chance to know about them cos they're so crazy good!

Of course, I expected a band under a record label to be good, but I thought since I've never heard of them, they couldn't be THAT good, and God, did they prove me wrong. Here are some of Art of Dying's music you should check out if you haven't heard of them:

I'm not repeating how much I love Rock music once again, because it's pretty self explanatory from my reviews and dressing. I love the gruffness in Jonny's voice... It's blends so beautifully into the music and its so necessary for someone singing Hard Rock. Not to mention how Jonny managed to transcend from a soft, mellow tone in 'Sorry' into his gruff rocker voice for the chorus and still sound so completely perfect. (Believe me, it's not easy. Took me ages to get a growl out.)

Personally I'd prefer something more upbeat (at least as of now), so I'd say my favorite out of the above 3 will definitely be 'Die Trying'. It's so easy to relate to the lyrics, the obvious line and the one I relate to the most being 'If it takes forever, I will die trying'. Not to mention how I love Jonny's voice and the entire melody and beat of the song. It's probably one of their best songs in my book.

If you haven't pressed play on any of the above video, I'd say if you love Hard Rock and music from people like Avenged Sevenfold, Shinedown or Breaking Benjamin, this is one band you'll HAVE TO check out!

Here's some background on Art of Dying. The band was formed in 2004 by lead singer, Jonny Hetherington, and guitarist, Greg Bradley. Art of Dying was signed to Reprise/Intoxication Records founded by Disturbed members in the end of 2009.

Besides being signed, Art of Dying has performed in numerous tours, such as 2011 and 2012 Avalanche tours fronted by Stone Sour and Shinedown, and also toured Rockstars' 2011 Uproar Festival fronted by (one of my favorite bands) Avenged Sevenfold.

So you see, these guys have been around for awhile... How they stayed under my radar, I'll never know, but I'm surprised that they haven't moved up the ranks to join Shinedown and Avenged Sevenfold by now. I mean, they're that FUCKING GOOD! And I'm definitely a fan. No questions there. (In fact, I got all their music!)

The band has released 3 albums as of date, among which one is an acoustical compilation of their songs. So, whatever music is up on this post is barely scratching the surface of the crazy amount of talent this band has! With this said, there's no doubt where my heart lies with this band:

They're good. In fact good isn't doing their music enough justice! They're FUCKING AWESOME!!! (and I only swear when something's THAT good!) They're seriously underrated and deserve more than what they have right now. (I'm not even sure 5 Crowns do them justice... They probably deserve 100 of it!)

Want me to review your band, any other band, an album or any song?
Send me an email request at pamela.averylim@gmail.com , tweet me @PamelaAvery_ or simply follow me on Twitter @PamelaAvery_ and I'll do up a review for your band right here on my blog!
I may be starting out here on my blog, but I'd love to give any band/album/song/music the credit they deserve!

xoxo pamela
Posted by Unknown at 11:54 AM

Your resident daydreamer.
When I'm not busying myself with Pinterest or vlogging, I endeavour to rediscover my passion in writing.
Join me in my rediscovery.
xo pamela